Out of The Bob–And down to Lincoln, MT

The Bob Marshall Wilderness was a tough walk-physically and emotionally.

I pushed hard leaving Marias Pass. Walking was just the best medicine. Unfortunately, the trail passed through a burn with hundreds of blow downs. Nothing too hard to get over, just tedious because of the number. With the wilderness status, blowdowns are cleared with axe and crosscut saw. The two man crews do an incredible job, it just takes a long time for them to clear all the trails. 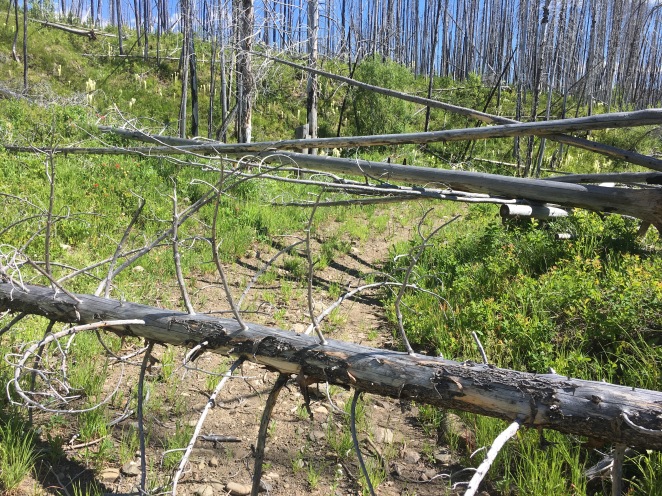 Twenty to twenty five miles took me from 12 to 13 hours a day to cover. I didn’t stop much nor eat much for the first couple of days. Traveling was just easier.

Lots of bear sign. Tracks, scat, and claw marks but no sightings for me. It might have had something to do with the fact I was yelling, “Hey, Bear!” every 5 seconds.

The approximate 170 miles between Marias Pass and Rogers Pass took from June 30 to July 7. Eight hard days of walking.  The Chinese Wall and the last two days actually on the Divide were the highlights. 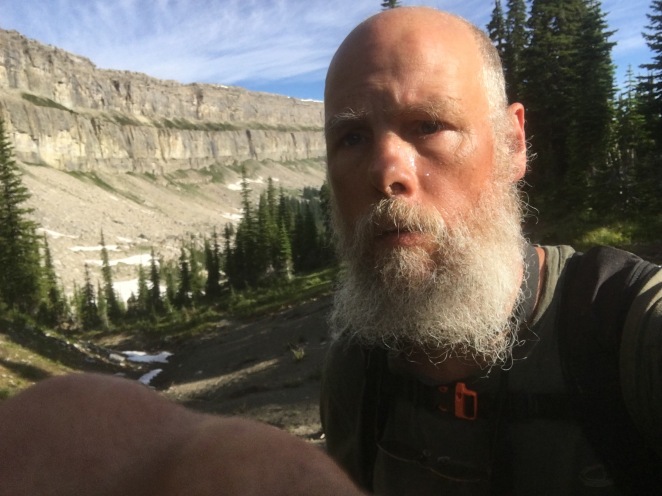 The wall was visible from a Spotted Bear Pass the morning before I finally made it there. It was massive. Mountain goats climbing high on the wall with eagles and hawks catching the thermal drafts.

In between the Wall and the last two days high on the Divide were long hot days through thick river side walks or long hot days through dry burns. One blowdown was literally 25 feet of solid trees. No way through or around. It was on the side of a steep hill. Over was the only way through. It sucked. Lots of scratches from that one. Burns have their own special beauty. They explode with flowers and the sight lines for what’s around you are greatly expanded. 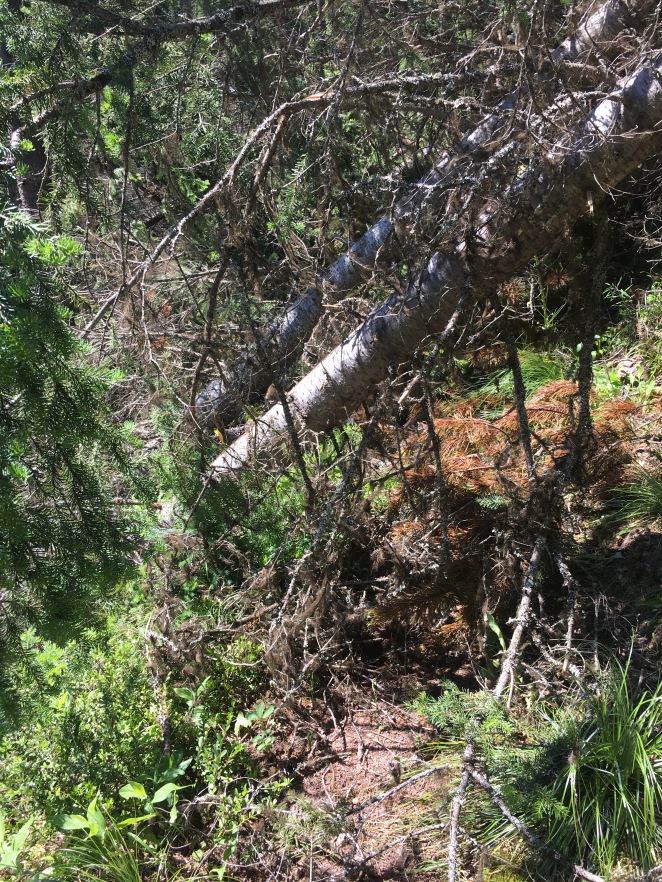 Finally getting up on the Divide was exhilarating. Mountains as far as I could see to the north, south, and west with the plains stretching out to the east. (Cell service again too after six days without.)

Getting up above tree line is hot too! These photos are from around 8500 feet. Photos do not depict how hard the trail was. Lots of sedimentary loose rock. Going up means sliding backward and going down means falling on your bum. First time is funny. After that it hurts. 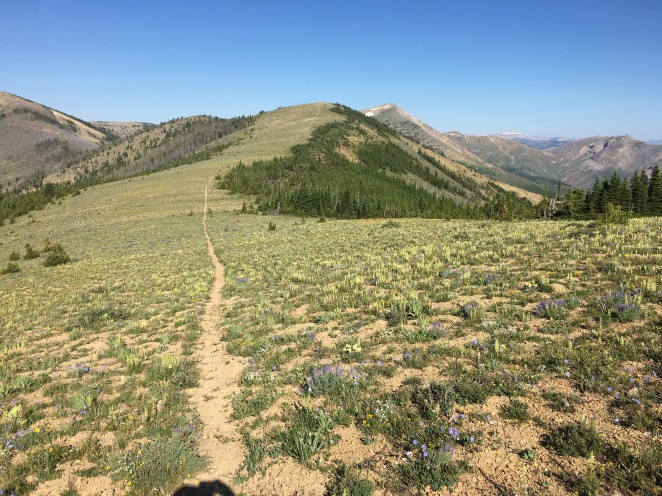 Staying on trail is different on the CDT compared to other trails I’ve walked. The Appalachian Trail and the North Country Trail are paint blazed. None of that happening on the CDT. After having made several wrong turns resulting in extra miles, I now consult my GPS app religiously.

After I walked away from Michelle and Maggie, I spent almost three days without seeing another person. Just as I was looking for a bivy spot around 7pm, a couple appeared in front of me at Dean Lake at 7200 feet. Their dog Stella was with them. They had a baby too! I was so surprised to see them, I didn’t ask any questions.

The three days alone (I camped alone all but one of the seven nights) gave me time to think about a lot. Most of it was pity. I didn’t handle the initial separation from Michelle and Maggie well. Luckily, having to be Bear aware, climbing over dead falls, and crossing rivers/streams doesn’t let you just become mindless. The CDT demands constant awareness.

I had been so caught up in the physical preparation that I wasn’t ready for the mental stress. With Michelle and Maggie slackpacking me through Glacier, I was always walking to them. Without that thought, the “head” hiking was harder.

Prior thoughts about how I would feel on the trail were not accurate. For the first few days I was miserable thinking about being away from Michelle for five months. Doubt about what I was doing was a constant thought.
Lincoln, MT

I’m at mile 294 on the trail. My mileage is slightly different due to starting at Chief Mt. and taking the Spotted Bear alternate. Tracking miles isn’t my thing, so I just go by the Guthook’s app mileage.

The pain of the trail bonds you to others doing the same thing. I’m enjoying a zero day in Lincoln with some of the other hikers on the trail. Lying in my tent now resting up for an evening of Biker Days replete with a stunt motorcyclist and a 70s/80s rock band, Shades of Blue. Caught them last night when I pulled into town. 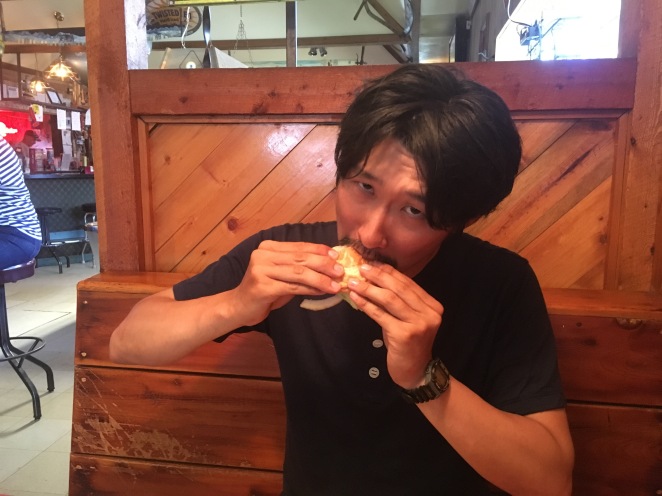 Sketch having a burger at a local establishment.

It’s been hot, so I’ll pull out early tomorrow morning and head for Helena, 70 miles or so. After Helena it’s another solid five or six day walk to get to Sula.

PS. I DID FEEL THE EARTHQUAKE. Woke me up and after an instant of wonder, I knew what it was.  I could hear rocks falling off the cliffs around me. Pretty cool.

5 thoughts on “Out of The Bob–And down to Lincoln, MT”

“Between every two pine trees is a doorway to a new world.” ~John Muir

I saw these two perfect pine trees and on the JMT and had to stop for a photo. I've looked back at the photo numerous times when I was contemplating changes.
Loading Comments...
%d bloggers like this: